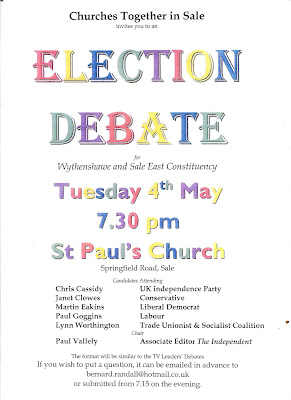 Posted by Trafford Heritage Society at 15:48 No comments:

(Trafford Heritage Society (THS), a non-politically aligned organisation, interviews Jane Baugh. We are grateful for the opportunity Jane has given... us. The opinions expressed in the film are her own and not necessarily those of THS. Other films, including some with people from other political parties are coming soon...)
Posted by Trafford Heritage Society at 15:35 No comments:

Jane Baugh - the importance of Greenspace

Jane Baugh speaks about the importance of Greenspace in the community with particular reference to the Greenspace Strategy proposed by Trafford Metropolitan Borough Council.

(Trafford Heritage Society (THS), a non-politically aligned organisation, interviews Jane Baugh. We are grateful for the opportunity Jane has given us. The opinions expressed in the film are her own and not necessarily those of THS. Other films, including some with people from other political parties are coming soon...)
Posted by Trafford Heritage Society at 14:59 No comments: 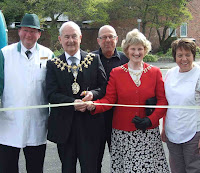 This was followed by a host of activities laid on by the Sale Moor Traders Partnership, including stalls, refreshments, a tombola, treasure hunt, games and a raffle.

the event raised more than £1,000 for the Mayor's charity, Stockdales...
READ THE FULL STORY ONLINE...
Posted by Trafford Heritage Society at 12:55 No comments:

On Saturday, 24th April the Warrener Street Car Park was officially reopened, following the successful public campaign to preserve it.
In September 2009, a number of residents and shopkeepers received a letter from a Manchester firm of property experts commissioned by Trafford MBC outlining the instruction to assess the existing amenity of Warrener Street car park and its immediate surroundings, which was at a cost of £5000 to the tax payer. One of the considerations of the assessment was to investigate compulsory purchase orders on the businesses in the immediate vicinity to redevelop the site. The redevelopment considered was a new supermarket.

Trafford Heritage Society conducted a survey of local residents and businesses to ascertain public opinion about the assessment. The overwhelming consensus was for the car park to remain and to remain free, as well as for it to be resurfaced. Trafford Heritage Society then coordinated a petition for local people to indicate their opposition to any redevelopment and to communicate their wish for the car park to remain open, free and for it to be adequately maintained. More than 3000 people signed the petition within a short time.

In November 2009, Trafford MBC then confirmed the site would not be redeveloped. To show their goodwill towards the residents of Sale Moor, the Council agreed to resurface the car park. This was completed in early 2010 and was officially reopened on Saturday by the Mayor Cllr David Higgins.

Sale Moor Traders Partnership provided a range of stalls and activities from local businesses and charities. The event was well attended by local people and council representatives. Matthew Colledge, Leader of Trafford Council said he was delighted to be at the opening and:
People are very pleased that their car park here in Sale Moor has not just been saved but its actually been refurbished as well and its of great benefit to the centre here, its a buzzing centre and we want to keep it that way, which is the whole reason why we have ensured that this work has been done to demonstrate were keen to preserve centres like this to future prosperity.

In response to concerns over future charging, Matthew Colledge said:
I just want to reassure all people; customers, residents and the community there will be no charging on this site. It will remain a free parking site

Trafford Heritage Society is very pleased the Council has listened to the views of the local community and hopes this will continue.

Posted by Trafford Heritage Society at 22:40 No comments: 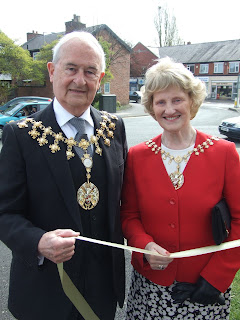 The Mayor, Cllr David Higgins, will do the honours at 10.30am and this will be followed by a host of activities laid on by the Sale Moor Traders Partnership.

Read the whole story online...
Posted by Trafford Heritage Society at 14:05 No comments:

In your report (SAM 15 April 2010) of the Planning Committee meeting which refused the planning application for 85 Broad Road, you quote Mr Titterton's comments alleging that I and my colleague Councillor Jane Baugh only got involved because of the nearing local elections.
His comments verge on the defamatory and are simply untrue. The fact is that the Priory Ward councillors have been in contact with the Council and local residents about this building for several years. It has been a source of concern ever since the owner left it unoccupied and open to vandalism, with the inevitable result that it rapidly deteriorated from a pleasant family house to a local eyesore.
The present application was rejected by a majority of councillors from across the political Parties. Rather than attacking the integrity of elected representatives, Mr. Titterton would serve his client better if he now tried to design a development that was acceptable to the Planning Committee and the local community.
Yours etc.

(Trafford Heritage Society is unaligned with any political party)

Posted by Trafford Heritage Society at 11:32 No comments:

The application to build 14 retirement apartments on the site of 85 Broad Road was REFUSED at the 8th of April meeting of the Planning Committee. 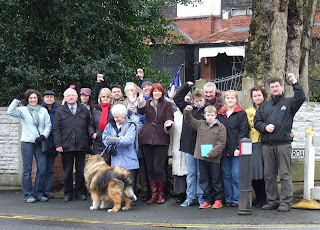 140 letters of objection had been received and a petition of 453 names signalled to members of the planning committee the degree of community concern about the proposed development.
Compelling representations against the proposal were made by both Cllr Jane Baugh and Cllr Barry Brotherton, who have been extremely supportive of the campaign against the development, and by Rachael Lewis whose house adjoins the property.
A represenatation for the the proposal was made by Andrew Titterton of AEW Architects on behalf of the owner, Michael McHale of Maple Leaf Developments.
Cllr Jane Baugh drew attention to the fact that the existing house is unnecessarily in a poor state of repair due to neglect and this could have been prevented by the owner.
A very lively debate followed with members of both parties arguing the merits for and against the application. Some members felt that the development had to be a certain size to 'pay' for itself, however, the majority decision was that it was too big a development for the site, would cause unnecessary loss of amenity to the immediate residents, and that despite the late amendment to increase car parking spaces on the site, increased on-street parking would be a serious issue opposite the school and on this 'tight junction'. Much mention was made of the 140 letters of objection and public concern for loss of street scene. It was also hotly debated whether the industrial style external polished concrete frame to the building would be in keeping with the local area.
Despite, recomendations from Simon Castle, Head of Planning to Grant the application members voted overwhelmingly to REFUSE on the grounds of overmassing, loss of amenity and street scene.
On leaving the building the Architects stated that they will go to Appeal.
Posted by Trafford Heritage Society at 14:20 2 comments:

We have some Good News! Rachael has done a brilliant job and 85 Broad Road is safe for now! Planning refused! More News will follow shortly.
Posted by Trafford Heritage Society at 12:58 No comments:

The Planning Committee will meet tonight to decide the fate of 85 Broad Road. The meeting is at 6.15 at the Trafford Town Hall, Talbot Road. All are welcome to come and to show opposition to the plans. Rachael will speak against them. If you can’t make it to support us, please think of us and wish her luck.
Posted by Trafford Heritage Society at 04:30 No comments: