The Leader of Trafford Council, Matthew Colledge, was quoted in the Messenger yesterday as offering a meeting with THS to discuss the findings of our petition and the overwhelming view in the village that there should not be redevelopment. His office offered today a meeting at the end of November. Trafford Heritage Society has declared this an insult to the People. THS is now asking the voters of Sale Moor to consider whether they are being well served by Cllr Christine Bailey and the Conservative Council.

Posted by Trafford Heritage Society at 09:18 No comments:

Our campaign receives Front Page treatment in today’s Messenger (click her to read it). The Leader of Trafford Council, Matthew Colledge says he ‘is happy to meet’ our campaign team. However, we are unhappy to report that no offer of a meeting has been made by Cllr Colledge. THS contacted his office again this afternoon to take up his published offer, but no-one could confirm that a meeting would take place.

If this is not bad enough, Cllr Colledge is quoted in the Messenger as stating that there are no fixed proposals to redevelop Warrener Street car park. However, ‘fixed’ they might not be but the Council has been secretly plotting to develop this site. This letter was sent to a number of addresses adjacent to Warrener Street last August. 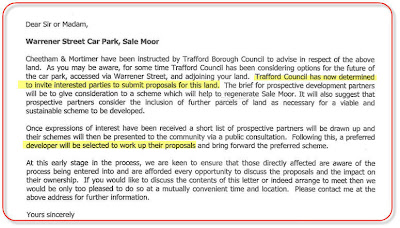 It is our view that Trafford Council is acting in an extremely duplicitous manner with regard to the future of Sale Moor and we strongly urge our supporters to e-mail, telephone or write to Cllr Colledge immediately and ask for an explanation of the conduct of the Council in this matter and to demand an immediate assurance that the Council will abstain from any further interference with Warrenener Street car park.

Posted by Trafford Heritage Society at 09:15 No comments:

Trafford Council rejects our request for a meeting!

Trafford Heritage Society requested a meeting with the Leader of Trafford Council to discuss the overwhelming view of the People that Sale Moor should not suffer ‘redevelopment’.

Dear Cllr Colledge,
You may be aware that Trafford Heritage Society has
been running a rolling petition in Sale Moor to take soundings on Trafford Council's stated intention to regenerate the village. The petition which is still ongoing has now greatly exceeded the paper petition which we collected to save the Sale Hotel; as I write it has reached about 2,000 signatories. We have also published sequences of still images, e-mail messages, transcripts of our hotline calls, and short films all of which contain feedback from the People of Sale Moor.

The People have spoken on this issue and have dismissed out of hand the Council’s proposals. However, Cllr Matthew Colledge, the Leader of Trafford Council, has rejected our request to discuss the future of Sale Moor, in the light of the responses we have received.

"...Further to your recent email to Cllr Colledge, unfortunately an early meeting is not possible due to diary commitments."

This seems to us to be another example of the contempt in which the People are held by Trafford Metropolitan Borough Council.
Posted by Trafford Heritage Society at 15:27 1 comment:

The rolling petition to save Warrenener Street Car Park has reached 2,000 signatories, and THS has asked for a meeting with the Leader of Trafford Council, Matthew Colledge. Trafford Heritage Society is the first and only group to have campaigned against the Conservative proposal to ‘redevelop’ the car park and ‘regenerate’ Sale Moor. Cheetham and Mortimer, the Chartered Surveyors, were commissioned, at a cost to taxpayers of £5,000, to invite expressions of interest for development of the car park and adjoining property. But the people of Sale Moor have given the ‘thumbs down’ to anything, other than the maintenance of free parking in the village. Trafford Heritage Society requested a meeting with Cllr Colledge several days ago, but so far, the Leader has not responded to this invitation.
Posted by Trafford Heritage Society at 15:50 No comments:

The Cat is Out of the Bag!

Trafford Heritage Society has obtained, under a Freedom of Information request, the following;

Trafford Council, at the request of Cllr Mike Cornes, has expended £5,000 of public money, on consultations and other services, in order to ‘develop’ Warrener Street Car Park, Sale Moor.

Trafford Council continually bleats about being underfunded yet Cllr Cornes feels that he has the permission of the People to waste a four figure sum of money, pursuing something which the people do not want.

Well, Trafford Heritage Society has asked the People, and the People have spoken. The rolling petition against any development, save a little resurfacing, has reached nearly 2,000 signatories. Even Conservative councillors, who tacitly support Cllr Cornes, are publicly calling for ‘no development’.

This fine house was bought in very good condition, several years ago by a developer wishing to demolish it and build an extensive block of flats. Planning permission was refused and the owner has done nothing with the building since then. Lack of maintenance has reduced the old house from its former grand state to its present disgraceful condition. Trafford Council has done little to mend matters and is now considering demolition. Trafford Heritage Society is now calling on you to support the preservation of this house. Rachael Lewis takes up the story. 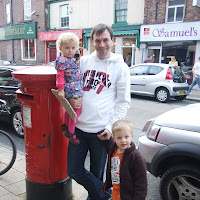 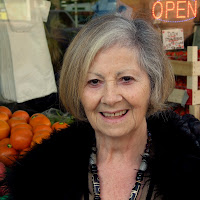 "...I'm totally against the supermarket. The area does not warrant it. It has a nice village feel. You can just wander about and meet folk..." 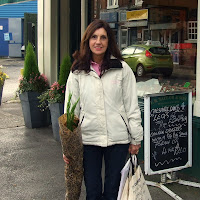 "...I've always used the car park. I love the car park there. We have enough shops. I know a few people are for it but they can go to the big shops in Sale. I use it all the time if I have a lot to carry..." 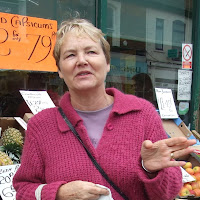 "...I have two points: 1) It's the only place you can park here. It's the only large car park easily accessible. 2) To build a supermarket there would finish off these nice shops. That's what happened in Sale. There is not a single greengrocers in Sale. It's still alive but it won't be here. It has a village feel and it would go..." 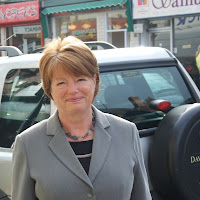 "...No they should leave it as it is. It'll be the death of the high street. The money would be better spent on giving us a better car park and resurfacing. We've got great local shops. They took a while to recover from the 80s and we want to keep them open..."
Mrs. Howarth
Trafford Heritage Society spent Saturday, 10th October in Sale Moor interviewing shoppers about their views on plans to regenerate Sale Moor and Warrener Street car park.
Posted by Trafford Heritage Society at 14:26 No comments: 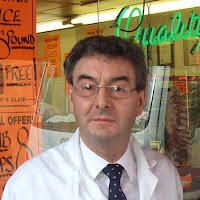 "...If the supermarket goes ahead where it is, it will be the death knell for the village... More and more supermarkets take over the whole country and the high street will close. It's a shame supermarkets don't put money back into high streets..."

Albert
Posted by Trafford Heritage Society at 14:17 No comments:

Trafford Heritage Society is now scrutinising the Greenspace Strategy proposed by Trafford (click her to read it) Metropolitan Borough Council. THS is particularly concerned for the future of the many small parks in the Borough, and that they may fall victim to a council besotted with selling off our heritage and erecting unwanted and unsuitable buildings in these spaces.. A Trafford Heritage Society group has been formed to fight a campaign on this important issue. Your help will be invaluable in the near future.

You can read the THS position here.
Posted by Trafford Heritage Society at 15:53 1 comment:

People of Sale Moor share their views about the prospect of losing Warrener Street car park.

Thank you to all who have got in touch. We will try to reply to everyone as soon as we can but due to the volume, it will take some time.

"We are horrified at the thought of yet another supermarket moving into our area.Our local shops and PO at North Parade have been taken over already by Tesco (albeit under the name Onestop).As regular shoppers at greengrocers,butchers and chemist at Sale Moor we completely fail to see any need for a supermarket of any sort to move into Sale Moor.The carpark is frequently almost full so it is definitely needed.All it needs is some resurfacing work as the pot holes are getting far too large to avoid now!" - JRB and MRB

"I feel we can not afford to loose our community spirit in Sale Moor, as has happened in Altrincham. We do not need another large corporation supermarket as we have enough in Sale..." - HN and MW

"I have just read about the free car park at the above address and wish to register my protest at the possible loss of free parking.
In my opinion it will be one more step in the demise of a wonderful shopping area. One can only assume the powers that be have gone mad. Can they not see the affect this will have on the shops who provide a good alternative to the likes of Tesco?
Is there some underlying reason for the possible changes or is it me being suspicious?
Finally I have a final message for those responsible.- DON'T DO IT!!!!!" - D.H.
Posted by Trafford Heritage Society at 14:04 1 comment: 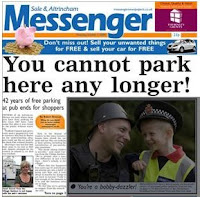 And Phil Gratrix wishes to make Sale Moor like Ashton-on-Mersey !
Read it online!
Posted by Trafford Heritage Society at 13:25 1 comment:

Trafford Heritage Society met with Cllr Christine Bailey, and other Conservatives this morning to discuss the future of Warrener Street Car Park and the prospects for saving the traditional shops of Sale Moor. Other interested groups were represented at the meeting, including the Traders, and the Sale Moor Residents. The Traders and the Residents are supporting Trafford Heritage Society’s Campaign to preserve Warrener Street Car Park as it is and to oppose the building of a supermarket in Sale Moor.

Trafford Heritage Society is not aligned with any political party, but we strongly urge an immediate assurance that there will be:

No sale of the Warrener Street Car Park !
No charging for the use of the car park !
No new supermarket in Sale Moor ward !
Posted by Trafford Heritage Society at 13:05 No comments: